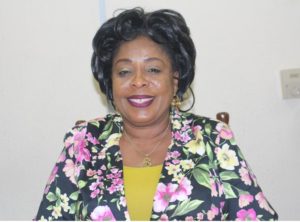 Mrs. Olatokunbo Adio was born on 29th June, 1963 in Ogun State.  She attended the famous Baptist High School, Iwo, in the then old Oyo state. After her secondary education, she gained admission to the University of Ibadan where she obtained her BSc. in Agricultural Extension Services in 1986. She later proceeded to University of Lagos where she bagged Masters in Public Administration in 2011. In 2009, she processed for her second Master’s Degree in Hospital Administration which she bagged in 2011.

Her flourishing career started in December 1995 as an Administrative Officer in Lagos State Civil Service. She has  worked in various Ministries and Parastatals among which are; Ministry of Transportation, Public Service Office, the then General Hospital Ikeja now known as Lagos state University Teaching Hospital and Civil Service Commission where she rose through the ranks. She was posted back to Lagos State University Teaching Hospital and in March 2017 she became the Director Hospital Administration and Human Resources where she is still serving till date.

Mrs. Adio likes to sing, dance and interact with people. She is happily married and blessed with adorable children.