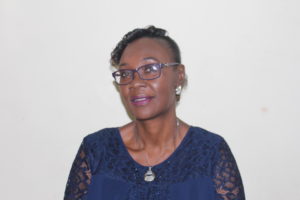 Then on, she attended the School of Mid-Wifery between 1989-1990. Mrs. Aina joined the Civil Service Commission at the General Hospital Lagos on the 9th of April 1991 and she worked there till December 1994. She joined Ayinke House, Ikeja, in 1995 as a Nursing Sister and rose to become a Senior Nursing Sister in 1997. She became a Matron in 2000. In 2003, she was promoted to the post of Assistant Chief Matron and eventually became a Chief Matron in 2006.

Between 2005 and 2006, she studied to become an Accident and Emergency Nurse at the School of Post Graduate Nursing, Lagos University Teaching Hospital (LUTH), Idi-Araba. She got her conversion to the officer Cadre in 2014

Mrs. Aina, in 2017 served as the Departmental Manager of Emergency Services, LASUTH and she became the Head of Nursing Services, in October 2017.

ADNS Adio loves travelling, cooking and reading. She is happily married and blessed with children.